Skip to content
Posted on December 11, 2018 by Debby Palti

When a great player who is also a great person, and was sidelined for season 2018 due to an injury and that same person re-injures themselves in the same spot, every supporters heart just dropped.  When Sam Docherty, who was looking forward to playing after being sidelined in 2018, re-injured his ACL, we can only imagine the depths of disappointment and despair that he and the club must be feeling.  Not only that but the same depths that every supporter must be feeling.  The support from both the club and the fans that Dochers will get must be something that is really heart-warming to him and the club.  After being named co-captain with Crippa, he must now push that disappointment to one side, focus on his recovery, in the same manner as he did when he first injured his ACL and continue to be a leader off-field.

There is speculation going around as to who will step in the shoes of Dochers. My question is does there need to be when you look at the leadership group?  Does there need to be a replacement? I say no.  In the leadership group, you have an ex-captain, and two magnificent stalwarts of the Carlton FC – Simmo and Ed Curnow.  There is no need for someone to take the reins off Dochers and give them to someone else, not with who is in the leadership group. Also because Dochers being the person he is will not be far from the game, the on-field game. Because as he has done this year, he will lead from the boundary. His leadership may not be on the field, but it will be present and for a leader, that is what you need- presence. 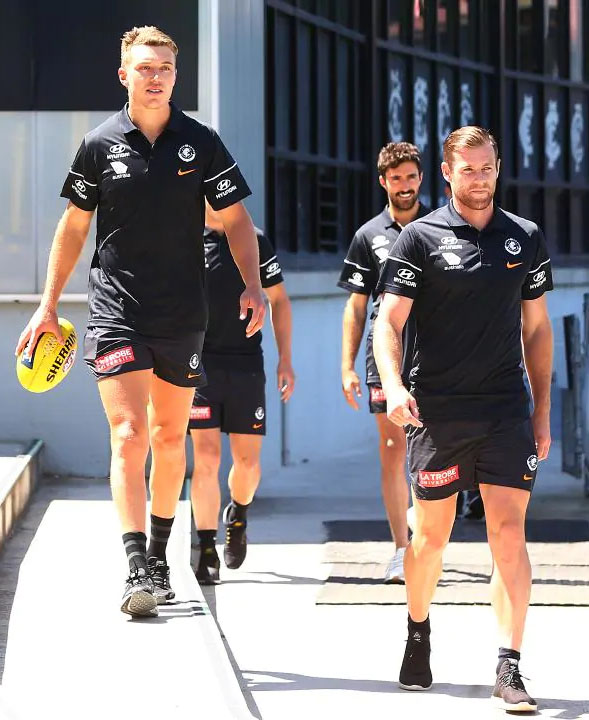 As for those speculating that Carlton will once again finish down the bottom, I disagree. No team and Dochers will probably agree, is just one player.  The club this year in the Draft and Trade did the one thing that the club needed – it got depth. The depth in the playing group means that if one is down, there is another that can step in.  It means that there are those that need to step it up a notch and fill that gap.  We have the depth to do that now and with one more space to fill in our list and also the prospect of placing Dochers on the long-term injury list, means we can enlist the services of a senior player to fill that role, maybe not in the same way, but it can be filled.

There is no question that Dochers will be exceedingly and sorely missed. He is a great player and a great leader of the game and the club. But after the disappointment has evaporated, I know that he will do what he has done in his career, lead by example and become a leader and mentor off-field while recovering. He will once again step in and lead on the sidelines while all the time ensuring that he is there as a captain off-field. He is all class!

The club while supporting him in every way possible are in a position to fill the void that Dochers has left. It will be filled, maybe not in the same capacity or way that Dochers would have brought.  Depth in a club is a paramount part of forming a team, a successful team. For no matter how much a great player is if that player goes down, it is the depth of the playing group that will define the success of that club.  No one player wins games, it is a group of players led by strong and fierce leaders – whether they be on the field or off.

Dochers will be back stronger and better and his leadership and his approach to playing the game while will be missed on the field, off-field, he will not be far from the action.  Get better soon Dochers.

Love my footy! Simple. Love music. Love art, writing, fashion, family, friends...living life without fear and conformity. I believe that everyone deserves a great life and freedom to believe in what you want as long as it does not hurt anyone or is violent. We all look at things differently, and we all have different views and opinions, but we all need to respect each other's views and opinions. We can agree to disagree. Call me a geek, but I love books, I love history, I love learning, I love footy and I love my fashion! Did I say I love footy?
Loading Comments...
%d bloggers like this: