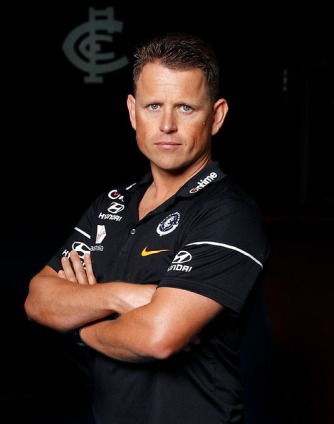 It’s been a while since I last wrote and this is only because of one factor – I was sick and it was not from Carlton’s performance, far from it.  The game against Sydney, I watched from the comfort of home even though I much rather have been at the game, but it did allow me to see the entire game from a different perspective.  Was I disappointed in the end result – absolutely, was I disappointed in how the team fared in the middle of the game – absolutely; am I depressed in the state of the team ABSOLUTELY NOT!

Social media went ablaze with some supporters stating that the team has not progressed or that Bolton is the right coach and some have incredulously stated that James Hird should take over!  I really, really don’t think that some understand what it is going on at the club and what the long-term plan is.

We have played three games this year against two sides that were in the top 8 last year and a team that is touted to be in the top 8 this year. Last year if had played these opponents we would have been smashed – in all games, we weren’t.  What the club and Bolton are building in the team is a group of players that have longevity in the game and the club to ensure long-term success that will hopefully render a Premiership.  They are not building a team that rises one year then falters the next – Bulldogs, or Fremantle or even this year – Richmond.

These teams are ones that have either won a Premiership or come close then falter in the next few years.  Richmond has lost some of their top players and the team does not have the depth in their group to counter that loss.  Do we want that? NO! I want to be in the same position as Hawthorn and even, dare I say it – Geelong, where they lose a few of their stars and can still win games.  In order to achieve this depth in the team, it takes time.

The suggestion that Bolton does not have what it takes to take a team to the top is really not very insightful – really.  He has had to re-build a club that has been decimated.  Some people say that they are sick and tired of hearing the word ‘re-build’ but that is because it has been bandied about but never really actioned. With Bolton it was.  He had to move the pieces of the chessboard that is a club, around to ensure that in the end, he can have not only the coaches required but the players to ensure that success is imminent.  This takes time!

Look at Melbourne, who were supposed to be Premiership contenders this year, how are they doing?  They look anything but Premiership material.

I was disappointed that we could not take home the four points on the weekend, as there were moments when we looked so close, but on reflection, we are on the right track.  We did not lay down and give up as we would have in the past.  We fought, it was just not enough. We cannot expect a meteoric rise up if we are not prepared to pay the price the next year.  We need to have a slow, steady and consistent growth in the group to reach the top and stay there.  That is the only way the Carlton FC will become a force once more. Anything else and we are doing our club a great disservice.

Let’s be disappointed, let’s be frustrated and a little impatient, but let’s remember the end goal – sheer dominance in the game for a long time – that is what I want and we are getting there.