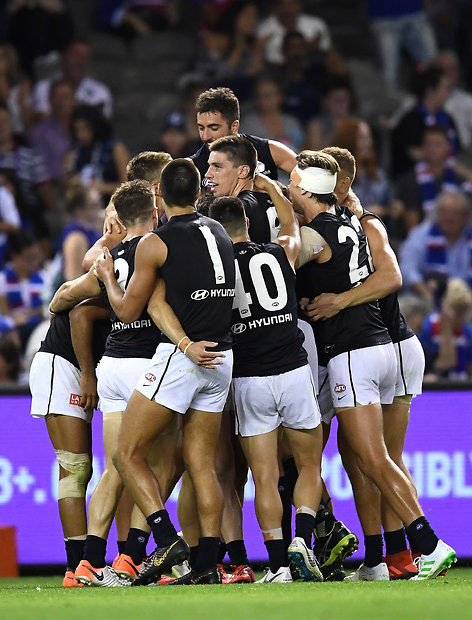 For the Easter weekend, my family and I head to Bryon Bay for Bluesfest and I know that it means missing a game of footy and as dedicated Cheer Squad member, it really pained me to miss this one. But given the time of the match, I was able to watch it live in our apartment and to those that were in the surrounding rooms, I humbly do not apologize for the noise I made during the game, the spectacular goals by Hazza and would you believe it – Casboult.  I do not apologize for yelling when Walshy kicked the goal that took us over the 100 mark or the tears of joy when knowing that the boys dug deep, played four quarters of great footy and reaped the rewards.

For the past months, I have stated that I believe in what Bolts and the club are doing in terms of building a group of players that have the stamina, talent, and ability to take us up the ladder. I have witnessed over these months those that simply do not see this.  I have stated that for the first time since the sacking of Malthouse, who as I have said before, decimated the club; the club has taken the road of an actual rebuild. Of getting rid of players that simply just do not stack up.  I’m not going to go into the whys and whys of Eddie Betts leaving, what’s done is done.

The club swept out the cobwebs of disunity, fractionalization, and players who were just in it for the sake of being part of a club and didn’t really put in when the time came to play at a senior level. I have said from the start that once the club mechanisms are in place not only in terms of players but coaches and administrators, things will change.

Bolts and the team have been patient in structuring the team and those around them to ensure that the playing group becomes a force in the competition.  Last year we were getting thrashed, this year we were beaten, but not thrashed, and last week’s game I believe was a catalyst for the group and Sunday’s match proved just that.

When you watch it on TV the perspective you get is enormous because you see the whole ground and what I saw was a different group of players from last week. They came out firing and stunned not only the footy world but the Bulldogs. I saw passages of play that were quick, calculated and determined. I saw players step up and step in.  SPS took hold of his role in the game and played in a way that we always thought he was capable of. His game was staggering and his movement around the ground was athletic and agile.  His role in becoming the ‘wing-man’ for Crippa was beautiful to watch.

But for me, while the team played like a well-oiled machine, with just a few hiccups that over time will iron out, it was the inclusion of Kroooz that made a huge difference. His pivotal role in the ruck and around the ground allowed others such as Jones, Casboult, and Hazza to be freed up in their specific roles. Jones is becoming an incredible player down back and with Weiters, proved to be a lynch-pin in our defense.

I have stated and will state again that I believe Jack Silvagni will be a great player but needs a bit more time to develop. His role in the match was a step in the right direction and his role which allowed him to move around the ground was pivotal in some of the plays during the game.  He was in the same position as Paddy Dow is now and I believe that with Dow, he needs to continue to be molded in the seniors. He is a different player than Silvagni and does not have the stigma of a name and I believe that he will only develop more in the seniors than in the VFL. We need his type of player in our mid-field.

This win while is bloody amazing, we still have a bit to go in terms of development, but what we saw on Sunday was a step forwards in this respect.  We must not go down the path that the Bulldogs went down and are now showing how much of a one-hit wonder of a team they are. I don’t want to be a Premiership one year then floundering down the bottom years later. I don’t want to be a team that has been touted as being top eight material such as Melbourne, then prove everyone wrong. I don’t want impatience for success to define us, I want longevity and if this means taking time to develop players, then so be it. I want Carlton to be dominant once more for a long time.  We saw on Sunday what the team is capable of achieving and while there will be other setbacks or other losses, you cannot say that we are not heading in the direction of eventual and continual success.

It was great to see, great to cheer and great to win and it was damn great to prove to those that only see the negative and not the growth of the club and the playing group, sink slowly back into their holes.  Now it is the time for the players to keep up that momentum. I believe they can.

Love my footy! Simple. Love music. Love art, writing, fashion, family, friends...living life without fear and conformity. I believe that everyone deserves a great life and freedom to believe in what you want as long as it does not hurt anyone or is violent. We all look at things differently, and we all have different views and opinions, but we all need to respect each other's views and opinions. We can agree to disagree. Call me a geek, but I love books, I love history, I love learning, I love footy and I love my fashion! Did I say I love footy?
Loading Comments...
Comment
×
%d bloggers like this: