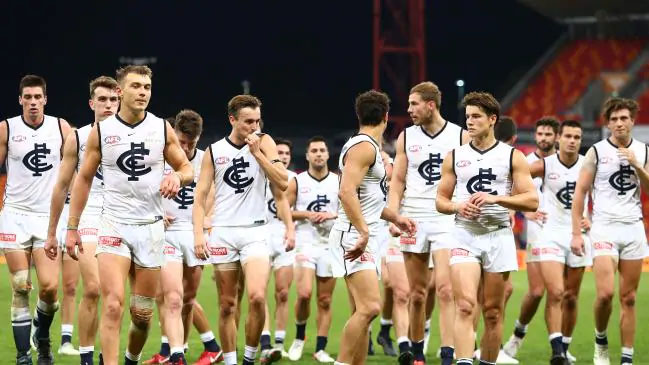 It’s taken me quite a few hours and days of lying awake and thinking about that game against GWS and in this article, which I will refer to it as ‘that game’.  Then came the barrage of comments, and posts from all and sundry.

Just to be clear, I am angry as hell at the lack of performance by players at ‘that game’.  I travelled to Sydney to see the game and along with others, we showed up to support the club and team.  To dish out that performance is, quite honestly an insult to the club and the top they represent.  The moment they step onto a field for a game, they must play not for themselves, not for the coach, not for the club, but for the team, and the supporters who turn up each week to cheer them on.  They must, I repeat MUST understand this.

Now there are calls to sack Bolts, in the middle of a season. Players are getting abused on social media together with the Board and all the coaches.  Now we have a right to be angry, frustrated, upset and even wanting answers to the question – why?  But we do not have the right to turn to social media and send out rude, disparaging and aggressive posts directed towards a player on any level.

We saw in the past week the retirement of a player, Tom Boyd, who at 23 years old and could have become one of the greats of the game. He retired because of injury and because of a struggle with mental health.  This is a very, very sad thing to say for a person of his age because we know that he is not the only one and won’t be the last.  The pressure of being an AFL player is intense and the belief from those on social media to think that their comments don’t influence the mental psyche of a person shows their complete lack of empathy or intelligence. The cowards that post these messages aimed at coaches, players and clubs must realise the damage they are doing, but perhaps this is their aim. But what they don’t understand is how this is damaging the brand that is the AFL.

There are players who I dislike intently (not from Carlton), but I would never come out and say disparaging remarks on social media to make myself look so clever and great. There are players that I have no respect for whatsoever, but this is my view and even while I’m sure others would agree, it serves no real purpose other than the person making that comment to feel better for themselves.  This is what is happening now on the social media pages that are Carlton based and on radio station pages, and the AFL.

After the weekend and that game, the flood gates opened with a massive backlash towards the coach. I feel that it is being misdirected. So, in that vein, here is a letter to the players.

There is nothing that I can say to make the pain of that game go away, because as a supporter who travelled to Sydney (I’m from Melbourne), together with others who travelled, what you feel we feel it too.  I don’t understand what happened given the week before.  We know you have the ability and capacity to be the hard, determined, no-holes-barred players that pursue success,  so what happened?

I don’t subscribe to the fact that it is the coach or coaches, and it is theirs alone that must shoulder the responsibility.  You are a group of talented and for some, inexperienced, players given a great opportunity that many would relish for.  I understand that for some, you are still coming to grips with the high-level intensity of the professional game that is the AFL. But you are trained, have the abilities otherwise you would not have been signed, so, you must shoulder some of the responsibility of the standard of gameplay that was shown at that game.

But a week is a long time in sports, and everything can change moving forward and the future of who you are as a player, how the club, the team, the coaches are now perceived is in your hands and yours alone.  You must not now be a player that jogs along, but one who runs with everything they have, and with determination, grit and a bit of ‘mongrel’ in your blood, change this.

You must be a player that lays it all on the line this weekend because that is all a supporter wants to see. We want to see you never give up the chase, never back away from a tackle, or a contested mark; never compromise the club by putting in a lack-lustre performance.  But you must play for the team, the club and most importantly for the privilege of wearing that guernsey and for the supporters.

This weekend, the ball is in your court and your hands and all you have to do is just run with it.

5 thoughts on “That Game…Dear Carlton Players!”

Love my footy! Simple. Love music. Love art, writing, fashion, family, friends...living life without fear and conformity. I believe that everyone deserves a great life and freedom to believe in what you want as long as it does not hurt anyone or is violent. We all look at things differently, and we all have different views and opinions, but we all need to respect each other's views and opinions. We can agree to disagree. Call me a geek, but I love books, I love history, I love learning, I love footy and I love my fashion! Did I say I love footy?
%d bloggers like this: