This past weekend has been an amazing weekend of footy. Not just in footy wins (or losses) but the over-riding sense from fans that the umpires and the AFL are just not getting it  – the discontent that fans are feeling about not only the game but the umpiring of the game.  Yet despite this, the sweetest victory is one where “the man” may have stuffed up big time, may have completely shown incredible bias towards one team over another. May have even not really understood the rules and gives a free-kick that is either not there, soft or is not sure why they blew the whistle and need confirmation from the other umpires.

The lead-up to the Carlton vs Adelaide game was one that was seen by the AFL world as a game that was one-sided: Adelaide would win.  If you looked at the tipping in The Age, only two people tipped Carlton to win and not by much.  With the Big Kreuzz out, it was going to be Andrew Phillips to take over as the main man in the ruck and he did a stellar job and even scored a goal.  With Zac Fisher out of the game due to illness, Paddy Dow stepped in.  The team was set, the ball was bounced and in the first half of the first quarter, it looked like the AFL world had gotten it right with regards to Adelaide forging ahead to ultimately win the game.

Interestingly, Adelaide had been one of the teams who are efficient in their scoring, yet Carlton, since Round 12, had outscored their opponents by an average of 15 points per game that resulted from possessions that came from their forward half.  After five minutes into the quarter, Adelaide had scored two goals. But a goal from Crippa put the score back to six points, then Taylor Walker scored and the Crows were again twelve points ahead. Matthew Kennedy and Darcy Lang scored a goal each and the score was even.  With two behinds and another goal by Taylor Walker, then a behind by Will Setterfield, a goal by Jack Silvagni, followed by a behind from Levi Casboult, put the Carlton team ahead at the end of the first quarter and from then on, in the second quarter, the third quarter and the final quarter, Carlton were ahead in every sense.

Carlton won the disposal count – 385 compared to 343; kicks, handballs, efficiency inside 50. The club was leading in hit-outs, clearances, center clearances, stoppage clearances, contested possessions, uncontested possessions, marks, marks inside 50, contested marks. But there were a few areas in which we were behind, one which was one we could control and one which we could not.  Our turnovers were 74 compared to 62.  Panic and being unsure of what to do and who to kick to results in turnovers.  The great thing about that is that even though we did turn it over, we never really stopped there because we tried and tried to get the ball back and more often than not, it worked.

The area that we had no control over was the free-kick count and that 27 to the Crows and 19 to Carlton.  Now I am all for the human error factor when it comes to umpiring in any sport, but this year, the umpires are getting it wrong so many times and it is hurting the game substantially because they are putting themselves in the forefront of the game and are effecting the game in ways that the AFL world should be wary of.

Fans of the game have the, on the whole, the utmost respect for the umpires and the job they do, in the past that is. But now, with the total lack of consistency, the farcical Score Review that saw what was a goal, not being paid and those in the Score Review box, not even paying the slightest bit of due diligence and halt the game and do what their job is: to ensure the integrity of scoring is upheld. Together with the huge discrepancies of free kicks in a game, and not just Carlton games,  the umpires are losing the fans respect.  Yet despite all this, Carlton (and Essendon) showed resilience and a determination that had been missing for some time and basically told “the man” – screw you, we are going to win anyway and they did. 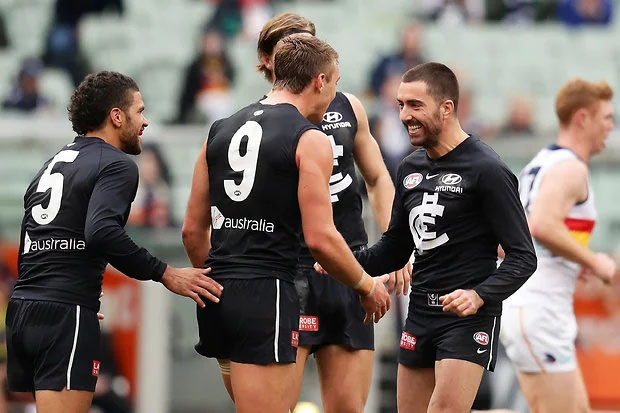 For Carlton’ supporters it showed what the team had been missing for a while, a hungry need to win, no matter what and despite being thwarted, this need never wavered. To become a team, a great team, no matter what is thrown at you, how you respond determines the outcome and Carlton responded.

The end of the season draws near and Carlton; could though mathematically and if all the cards fall in exactly a very certain way, make the top eight; will end the season knowing that this club is on the rise. The fans can see it, the coaches can see it and the players believe it. Because they won despite the barriers placed in front of them from “the man” and that makes this win against Adelaide, all the sweeter.

I Am BOUND BY BLUE!