What we learn from the past is not to make the same mistakes again. It seems that for some, this message does not get through and the same mistakes are made again, and again.  However, what we also learn is what makes a great person or team – just great.  What defines them in terms of who they are and what they stand for. The past two weeks this concept was front and centre in my mind because of two reasons – the Reunion of the Carlton 1979 Premiership team and this week the announcement of Hawthorn’s Jarryd Roughead retirement. Both of these events serve as a catalyst for current players and especially those that have the honour of wearing the Navy Blue.

I attended the Reunion function along with over 900 other Carlton supporters. We were privileged to have a player sit at our table and more than that, to hear from some of the players from the 1979 Premiership Team, but none more than Jim Buckley, who is a great storyteller.  Besides telling us some great stories about their lives as Carlton players and some tales of what occurred during that season, the most prolific statement was made by Buckley.

When asked what message you would send the current players of the club, he stated that to remember that you are a team and that you are in this together and that they, the other players, will back you up. That you have to trust that they will be there for you during the game.  The camaraderie between the players was so evident that it was oozing on the stage when the players got together. The way they interacted with each other showed that what makes a great team greater is the bond between the players the pride for playing in a Navy Blue guernsey.  That message is one that is being displayed right now with David Teague giving this same message to the players – play for the pride of wearing that top you get to put on and for the club that it represents, and for each other.  Do that and success will come. 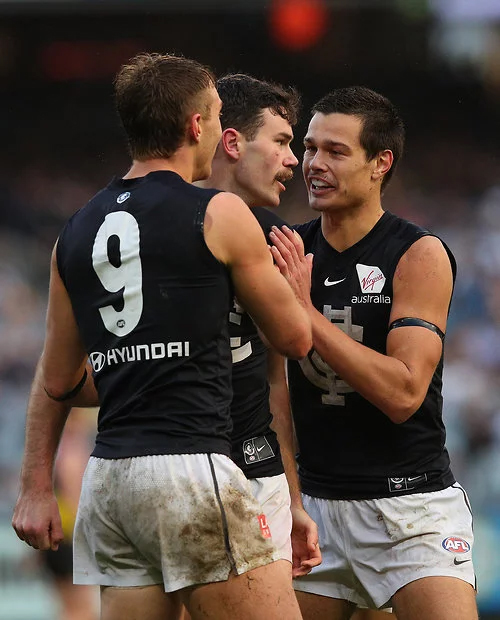 This weekend’s match did not pan out the way we all hoped it would, but we must not get disheartened either, for we are starting to become a team, a union of a group of players who are proud to wear the Navy Blue and fight for it.  McGovern did that, Jonesy did that, Wieters did that, SPS did that, Murph did that, Silvagni did that, Walsh did that, Daisy did that, to name but a few. 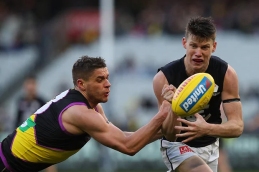 This game while means nothing with regards to our season, it is one that is a part of the growth of this team since Teague has taken over.  It was never going to happen overnight, it was going to take time and as Teague stated in his press conference, the team has to just learn to play four quarters all the time, every game.  They didn’t this game but with two games left, they have the chance to prove to themselves and to others that they are proud to wear the Navy Blue and that they are on the right track to becoming a team that could be reminiscent of the team from 1979. 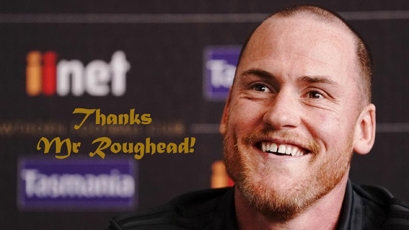 This is so emulated in the Hawthorn player – Jarryd Roughead who epitomises what all Aussies love in a sportsman – decency, integrity on and off the field. His retirement must be a celebration of a great player and a great person.  His humility in accepting his limitations this year has been one that all young players should try and emulate.  His capacity to understand the game and his role has been one that is sometimes missing in the realm of professional sport. His focus on putting the team’s needs ahead of his own is something that must be the core ingredient for any team and any player, for it is that which makes a champion team rather than a team that is filled with champions.  Because it can make the ordinary become extraordinary.  Roughead played in such a team. Jim Buckley played in such a team.

What this shows is that don’t be fooled by thinking to have top class, champion players in a team will make them a team to be a champion one – it won’t.  It is those teams that play for the pride of playing in their team’s colours and for each other that become the champion team.  This need to play for each other, not for yourself is what makes a team a champion one.  Carlton has the makings of that and with the right person at the helm, emulating this by the way they carry themselves on and off-field, Carlton will become a champion team.

#I am Bound By Blue